WARNING ABOUT PHYSICAL BOOK: If you want to order the physical book, please scroll down to the bottom of the page past the Buy Now link to the Physical Book section. If you're trying to buy, and it doesn't ask you for your address, you're buying the digital version!

Lana is a monster hunter. She kills vampires, werewolves, demons and all the other terrifying creatures of the night. She doesn't do it because she's the chosen one. She doesn't do it because it's her duty. She does it because working one job just doesn't cut it for a millenial in Southern California.
She takes contracts using iHunt, an app which freelance monster hunters use to find profitable prey. It's like Supernatural meets Uber, Buffy meets Airbnb, and sadly, Blade meets Fiverr.

Lana's story is about making ends meet, about economic anxiety, and about what a person's willing to do to pay the bills. It's a equal parts horror, dark humor, slice of life, and social commentary on the gig economy.
She deals with the same problems other millennials face: begging the landlord to extend your rent due date until the next paycheck comes, dating guys not concerned about their partners' orgasms, dating women who have to sleep all day because they burn in the sun, the cost of clothing you need to replace because you got into a fight with the undead, and trying to explain that the security footage where you're killing a guy is actually a viral social experiment to advertise your new film. You know, normal millennial issues. I'm sorry, I meant to say #millenialissues. Gotta get those views!

#iHunt: Killing Monsters in the Gig Economy is the first release in a series of novels. You can read them in any order, but if you want to read them in chronological order, they go:

#iHunt: Frankenstein's Monster (Sort Of) (But Not Really)

#iHunt: The Chosen One

But #iHunt Frankenstein's Monster is Pay What You Want, so it's a good, free to read place to start.

In order to download this book you must purchase it at or above the minimum price of $5 USD. You will get access to the following files:

Support this book at or above a special price point to receive something exclusive.

This is for a physical copy of this book. This requires you to enter your shipping address. Also, if you want it personalized, let us know!

If you're inside the United States, shipping is included. If you're not, please contact me at olivia@ihunt.fun for a shipping estimate.

I've been ridiculously excited to get a taste of Hill's #iHunt world since I first saw previews for the #iHunt roleplaying game, which has been on my play and review list, the Spreadsheet of Many, which has taken some serious knocks over the past year, for too long, but I'm hoping to get to play soon! So, when I saw Hill's #iHunt Pandemic Free offer I could not download this novel fast enough or be more thankful now than I did!

Unfortunately, my partner and I are both in the at-risk group for Corvid, so when they developed a cough after visiting family not a few weeks before the UK lockdown it meant solo isolation. Solo isolation for two disabled people who are each other's carer fucking sucks. My partner was in the bedroom and I was sleeping on couch cushions with a sleeping bag in the spare room, doing everything around the house to keep us going and seriously worrying about their health. It was hell, but I was so incredibly grateful to have this book to look forward to every night. Every night I would read until I could not stay awake, unwilling and unable to stop reading until my body made the decision for me. I was given countless contusions from dropping my tablet on my face because I was absolutely captivated and could not put it down until it dropped from my hands. I am sure I would have broken my nose and lost teeth if not for the protection afforded by my sleep apnoea mask!

The point I am making is this book actually helped me through a genuinely awful time. I will always be unbelievably thankful to Hill for that.

Despite being about hunting vampires and the wider supernatural world adjacent to our own, this is the most honest and true reflection of the life as I know it and you are almost certainly living. Hill’s writing style is infectious, Lana is a captivating character painted with warts and all, and I genuinely felt every emotion on this wild ride. I cannot express how vindicating and heartening (and depressing, but that’s the world’s fault not Hill’s) it was to see the world I live in and see it discussed so candidly.

The tea here is absolutely scalding and I am here for it!

In a world filled with countless vampire properties, it is so refreshing to have a story that is not trying to take the monster away from the abusive and…well monstrous things vampires are and represent. The vampires for the most part are adjacent to the story anyway. This is Lana’s story. This is her world and her difficult job she has trained for and dedicated her life to. It comes with huge risks, expenditures and uncertainty, which I see many parallels to the life of a creator in this age of the gig economy and the lack of support for the arts. I know a book is something special when I have already ordered the next one less than halfway through! I cannot express how excited this makes me to play the roleplaying game and devoured the novel series!

While comparison’s can be drawn to True Blood, Supernatural and Buffy the Vampire Slayer (more on that in The Chosen One), I believe that is only seeing the set dressing and supernatural markers, doing an incredible disservice to the world Hill has created with #iHunt. I think the core of Lana’s tale is far more akin to Breaking Bad, Better Call Saul and The Wire; brutally honest, if extreme, stories of the lives many are forced or feel the need to lead in our absurd and cruel society.

This truly was not like anything I had read before and, honestly, I was not expecting it of a novel tied to a roleplaying game, but I am absolutely thrilled to be wrong! 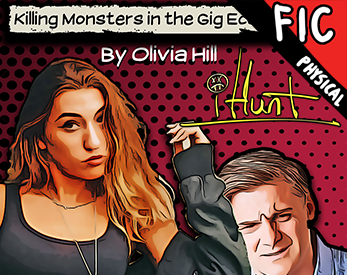